Meetbot Logs 2.0 is Out Now

I’m happy to announce that Meetbot Logs (or Mote) 2.0 is now live at meetbot.fedoraproject.org. Meetbot Logs allows the community to see the minutes and logs from meetings. The new version is a major rewrite and adds features like a calendar view, asynchronous loading, quicker search, and dark mode. It should also be easier to maintain and develop in the future.

END_OF_DOCUMENT_TOKEN_TO_BE_REPLACED

With an aim to gather information about Fedora IRC meetings and especially understand how Fedora contributors interact in these meetings, I turn towards Datagrepper. Datagrepper is a JSON API that lets you query the history of the Fedora Message bus (or fedmsg) for corresponding data. Here is a quick look of the raw feed of Datagrepper from the fedmsg bus with messages for topics like buildsys.rpm.sign and buildsys.task.state.change.

fedmsg has a few Meetbot-related topics corresponding to Meetbot commands which I gathered daily, weekly, and monthly IRC meeting data from. You can construct queries for a time period by specifying  the start and end parameters for the query. Using count variables from JSON data dump, I found the total number of messages pertaining to our query. You can also use Datagrepper Charts API for some basic visualizations.

meetbot.meeting.start: Messages on this topic are published when an IRC meeting starts (using #startmeeting Meetbot command).

meetbot.meeting.complete: Messages on this topic are published when an IRC meeting ends (using #endmeeting Meetbot command). 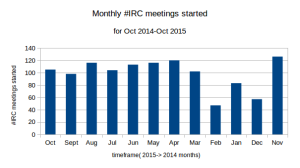 On a normal weekday, generally 3 to 4 meetings are started/completed. Saturdays have lower values(~1-2) and no meetings are generally held on Sundays (the average IRC meetings per day started is 3 while that of IRC meetings completed is 3.3, and the median for both is 4). The highest value of IRC meetings started as well as completed across different channels occurred on 23rd March 2015 (started 11, completed 14) to Monday (next working day) after a week with particularly low IRC meetings. (March 11th to 18th 2015).

meetbot.meeting.topic.update: Messages on this topic are published when meeting topic is updated (using #topic command). 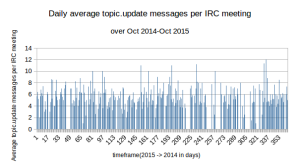 Calls for Help in Meetings

meetbot.meeting.item.help: Messages on this topic are published when attendees call for help on items (using #help Meetbot command). This topic was introduced at the end of March, therefore previous values are not available.

The #help command, as shown by the graphs, is rarely used by IRC meeting attendees, only being used once per month in the past two months.

meetbot.meeting.item.link: Messages on this topic are published when attendees link information to an item (using #link Meetbot command). This command was introduced at the end of March, therefore previous values are not available. 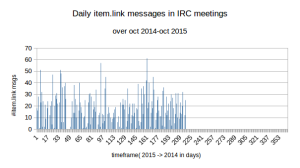 To get an overview of statistics related to the Fedora contributers attending IRC meetings (both attendees and chairs), I used the meetbot.meeting.complete messages (meetbot.meeting.start messages only show the initial attendees). I used the data for the  past three months (August to October 2015).

During the past 3 months, 337 IRC meetings have taken place. On average, 10 people attended an IRC meeting, including the chairs, and the mean size of chairs was 4.67 for an IRC meeting (mean 4.67, median 5).  Also, the largest meeting in the past three months comprised of 27 attendees and the largest group of chairs included 10 Fedora contributors.

Other Questions to Ask

Check out threebean’s blog posts on Datagrepper here. He is one of the super awesome people behind fedmsg and Datagrepper.

Here is a fun word cloud visualization of IRC meeting attendees over the past three months (Fedora CommOps seems to be very active – you can see a lot of CommOps members here: decause, threebean, mattdm, lmacken, jflory7 and mailga too!! Yayy!!)