The Linux Foundation, the organizer of the conference, says the following about LinuxCon:

“It is the place to learn from the best and the brightest, delivering content from the leading maintainers, developers and project leads in the Linux community and from around the world.”

The Fedora community has been at all European editions since 2011 and this is a report from the last one, which took place on Oct 4-6.

This year‘s LinuxCon Europe was co-located with another conference organized by the Linux Foundation, ContainerCon, and held in the city of Berlin. I took a 7-hour train ride from Brno and Zacharias Mitzelos a flight from Greece. The third representative of the Fedora Project, Bhagyashree Uday Padalkar, happens to live in Berlin as a member of a research project. I met Zacharias in the hotel in the evening before the conference. I brought swag and he took care of roll-up banners.

The conference took place in the conference area of InterContinental Hotel. Our hotel was close, but we still had to get up really early because the Linux Foundation required us to have the booth ready before 7.30am.

The booth location was not great. We ended up in the corner on the other side of the exhibition area from the entrance. But I cannot complain, as we got for free what companies had to pay a lot of money for. And I‘d like to thank the Linux Foundation that it supports the Fedora Project this way every year.

Our booth consisted of one table, two roll-up banners, two chairs, and a TV which was rented by Red Hat for us. We used it for the “Fedora Modularity” demo, which stirred some attention. Adam Šámalík of Red Hat who works on modularity in Fedora helped us explain to visitors what it’s about.

But we were not the only booth with some Fedora content. Red Hat had a booth on the other side of the room. People could see Fedora and meet Fedora contributors there too. Peter Robinson showcased Fedora Workstation running on a Raspberry Pi and there was also a little cluster running OpenShift on the top of Fedora Atomic.

You could also see Fedora at the booth of Intel.

The audience of LinuxCon is different from other Linux events. It’s definitely more business-oriented. The sponsor prospectus says the distribution of visitors is:

So the largest group is developers, who I assume given the nature of the event, develop on Linux. It’s definitely the kind of audience Fedora should be interested in. And it’s still a different audience than at Linux events for enthusiasts, where we traditionally have a strong presence.

At LinuxCon Europe, you can still meet people who have never heard of Fedora and get reactions such as, “Oh, so Fedora is a variant of Linux, right?” 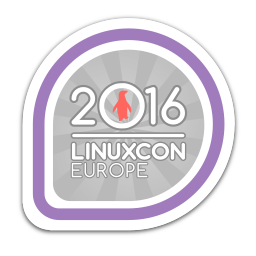 We created a badge for visiting the Fedora booth at LinuxCon Europe to have one way to measure an impact. To be honest, this didn’t go that well. Out of ~1300 visitors, only 16 claimed the badge. The majority of these people were Fedora contributors visiting LinuxCon Europe. Not that no one else was interested, but the process to get the first badge is sort of cumbersome. People need to be connected to the Internet and WiFi often sucks at conferences. Moreover the FAS account creation often fails and it’s not mobile friendly. Some people gave up and copied the URL to finish it at home. But I checked and no one did.

Nevertheless, we had great conversations with several developers who had been Fedora users for some time and were interested in becoming contributors. So we usually went with them through different roles in Fedora to find what matches their interest and skills. We also gave these people “Proud Fedora User” t-shirts, which they proudly wore the next day which improved our brand visibility even more.

I’d like to thank the Fedora Project for covering our travel and lodging expenses and making it possible for us to represent Fedora at LinuxCon Europe. I would also like to thank Red Hat for providing us with a TV, which made our booth definitely more attractive and for promoting Fedora at their booth as well.

In my opinion, LinuxCon Europe is great for building a brand recognition among technical staff of businesses interested in Linux. This year was the first time when we met a higher number of developers who had already been Fedora users and were interested in becoming Fedora contributors. Next time, we should be more ready for them. We discussed that with Brian Exelbierd and one of the ideas was to create cards explaining different contributor roles in Fedora and a set of steps to get involved. That could be useful not only for LinuxCon, but for many other conferences.