On Tuesday I attended OSCON‘s Open Container Day with members of the OpenShift team and the CentOS team. This turned out to be an interesting outing and I got pulled into an interview on TheNewStack with CentOS member Jim Perrin to discuss the Fedora and CentOS respective docker layered image build systems and tooling. This was a great opportunity to explain what we’re doing, why we’re doing it, and what we hope to provide to the community. This day was roughly half and half tech overview of different container tech and sales pitches from various companies. Which is somewhat understandable, since it’s a sponsored day event. I helped man the OpenShift table before getting pulled into TheNewStack interview.

Day by day at OSCON

Tuesday evening we had the opening session of the Expo Hall and I worked the Red Hat Booth. During this initial opening of the Expo Hall, most attendees seemed to be on a rapid-track run through trying to grab all the swag they could get. Not many people were overly interested in talking about tech but instead were grabbing things and moving on (the booths with t-shirts nearby appeared to be having a rough time keeping up with demands of the crowds).

Wednesday and Thursday were both full-day Expo Halls and I worked the booth from open to close each day. This was a lot of fun, I love working the booth and talking about our technology to people.

One thing that I found interesting and unfortunate is how many (probably 4/5) people I spoke to who weren’t even aware that we (Red Hat) had expanded beyond just the Operating System nor were they familiar with our upstream contributions to the various projects upstream that are related to our products. Also, to add to that, many of them were using tech that was ours or that we’re top contributors to but had no idea we were involved. The most popular of these based on what people at the booth wanted to talk about were OpenStack, Ceph, Ansible, Docker and OpenShift / Kubernetes. It was good to receive positive feedback when people learned how involved we are upstream. They were impressed to learn that we actually do continue to push upstream as a focus and core part of our corporate culture even though we’re a large, successful, enterprise-focused company these days.

Almost nobody I spoke with at the booth knew about the new No-Cost RHEL subscription available via developers.redhat.com so I spoke about that a decent amount.

I also had the opportunity to meet some prominent members of upstream projects. All of them had very positive things to say about Red Hat because of our focus on upstream contributions. This was extremely nice to have happen since I’ve never been to OSCON nor been to many conferences targeted at the greater Open Source Contributor Community. One of these people was Kelsey Hightower, who is a really great person, super friendly, extremely smart, and an amazing presenter and speaker. Kelsey is well-known in the community for his work in Kubernetes. He gave us a nice shout-out on Twitter.

Kubernetes in full effect with @googlecloud and @openshift at the Red Hat booth. #oscon pic.twitter.com/KVA2z4Nhwz 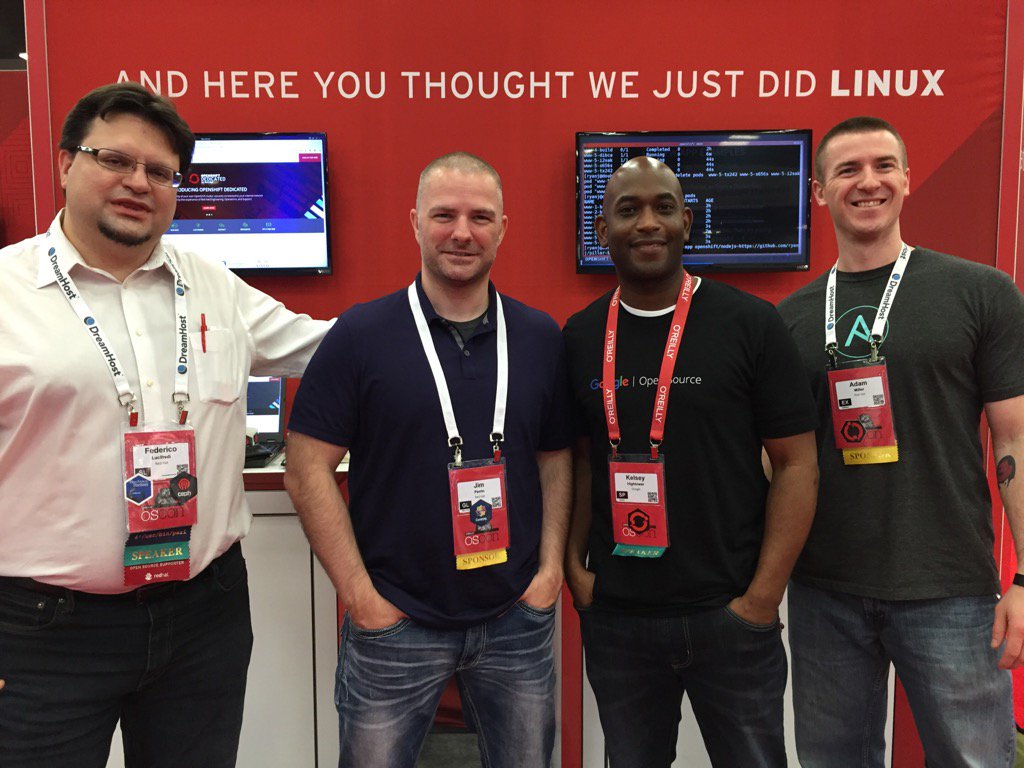 Overall, OSCON was a very positive experience, but we definitely have some work to do on educating the world about what all we do. This includes how much we both participate and contribute to upstream beyond just the operating system but also that we offer products in those spaces as well. The tagline “And Here You Thought We Just Did Linux” was quite helpful in starting conversations about what we do beyond just the operating system, so the booth design and setup was quite good in helping drive that point home. More than once, we were asked, “Well, what *do* you do other than Just Linux?”, which was a great segway into all sorts of things like OpenShift / Kubernetes, OpenStack, Ansible, Gluster, Ceph, oVirt, ManageIQ, FreeIPA, WildFly, OPNFV, KVM, as well as the various upstream projects Red Hat contributes to.

Aside from the conference attendees, it was really great to get to meet other Red Hatters that I’ve never had the opportunity to meet. We had Hatters from Marketing, Talent Acquisition, Solutions Architect, Contracting, OSAS (Open Source and Standards), and The Office of the CTO. It was great to meet and spend some time with them.

I hope my presence was useful, that I represented Red Hat well, and that I will have the opportunity to attend OSCON again in the future.